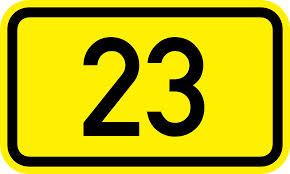 Each parent contributes 23 chromosomes to the start of human life.

23 seconds is the time it takes for blood to course through the human body.

There are 23 letters in the latin alphabet.

There are more reported UFO sightings on July 23rd than any other day.

According to the Tantrists, the male sex cycle is 23 days.

“W” is the 23rd letter of the Latin alphabet. It has two points down and three points up.

Julius Caesar is said to have been stabbed 23 times.

I am thrilled to report that the most recent visit to Charring Cross Hospital confirmed that the numbers continue to drop!  She will not be considered as being “in remission,” until they get below 13 and remain there for a period of time.  However they are heading in the right direction.

Arielle is strong, beautiful and as feisty as ever! Her hair is about a 1/4 of inch long and is growing back dark and as thick as it ever was!  She looks quite funky and exotic (although of course, she doesn’t think so!)  She goes back to teaching part time today and I hope she has a fabulous day!

Cancer continues to plague my family in other areas, but for now… Arielle is having the last word!