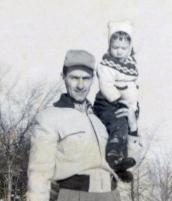 I was the youngest of three children and the only girl.  Yes,  I may have, been a wee bit spoiled and “daddy’s little girl.”

My Dad had always wanted a daughter, but with 5+ years between Charlie and me, my parents had pretty much given up on the idea that having a girl was in the cards for them.

That’s when the Virgin Mary intervened.

As the story goes, my father prayed to his patron saint (the Virgin Mary) for a daughter.  I’m not sure how long this went on, but as said, there were almost 6 years between Charlie and I, so I assume it went on a few years at least!  His prayers (and possibly his worst nightmare) were answered on Tuesday, May 11, 1954.  In gratitude and respect,  I was named “Mary” Melissa and I was his pride and joy.

The first 5-6 years of my life, he and I were inseparable.  If he went to his workshop in the cellar, I was there.  If he was out washing the car, I was “helping.”  If the car needed gas, I was sitting in the front seat, before he had his keys.  I even went with him every Saturday morning, down to Shrewsbury Street, when he went to see his  bookie!  Hey, don’t judge…  he made me wait in the car!  It’s not like he was contributing to the delinquency of a minor or anything, I didn’t know what a bookie was till I was 8 or 9!

My favorite thing to do with Dad was to go to Spags!  If you never experienced Spags, you haven’t lived!  Unfortunately, it’s gone now, but there’s nobody in the greater Worcester area (over 50) who can’t tell you about Spags!  It was always crowded, like with hundreds of people and the narrow isles were piled 8-10 feet high with boxes, barbecues, bar stools and everything else from A-Z.  My Dad would put me up on his shoulders, so that I didn’t get lost or trampled and it was fabulous up there!  He was about 6’2, so I sat far above the crowds, looking down on a sea of heads.

Green Hill Park was another favorite.  We’d go to see the Buffalo (yes, you read that right!) and feed the deer and the humungous gold fish, stale bread.  If it was summer, the park canteen would be open and I’d get ice-cream!

At the dinner table I sat next to Daddy and after dinner, I’d sit on his lap, as he sat in the Lazy Boy, and we’d watch the evening news, the Honeymooners and on Sunday’s, the Ed Sullivan Show.

I’d always be “Daddy’s Little Girl,” but when I became aware that I had two big brothers (all to myself!) that relationship changed forever.  I loved my Father, but I worshiped my brothers.

I traded washing the car, for climbing trees. Instead of sitting in the cellar watching Dad on his latest project, I was running around with my brothers and the other neighbor kids, playing hide and seek.

Dad and I remained tight, but I wanted desperately to be accepted by my brothers so I became a “Tom Boy!”  Pretty in pink became passé and I no longer wanted to be made of sugar and spice and everything nice.

My Dad responded like a trooper.  He adapted to this unfair twist of fate by teaching me how to use hand tools; how to change a tire, check the oil levels in the car and how to add anti-freeze.  He even thought me how to understand and appreciate the rules of American football!

The teenage years proved more difficult to our relationship, as sex, drugs and rock and roll proved more enticing than automobile maintenance, the Andy Griffith Show and the newest Stanley Tools.

“Daddy’s Little Girlie Girl” slowly, but surely, grew up… but there is no doubt, it was his love, guidance, patience and forgiveness that helped to create a strong, independent, “take no shit,” no nonsense woman.

If it were not for my Dad, I wouldn’t be the woman I am today… and that is unimaginable.

Thanks Dad!  Happy Fathers Day, wherever you are!