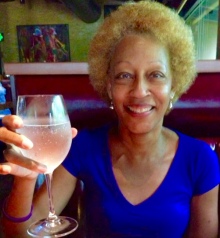 It’s not like I didn’t know this was coming…  I mean she had “Pancreatic Cancer,”  for goodness sake!

It was going to happen eventually and by all accounts it should have happened long before now!  Four and a half years is long time, especially for this type of cancer where 74% of patients die within the first year of diagnosis!  So… on the whole I’d say, she did amazingly well!

Don’t get me wrong she went through HELL every step of the way, but to an outsider’s eye it seemed that she managed the disease, her treatment and all of the setbacks with little concern and a whole lot of grace and dignity.

I remember receiving the IM from her…  We were both still working at American Express, she was in Florida and I was here in Brighton.  There was an urgency in this one line instant message.  It simply said:  “Can we talk?”

We were talking within the hour.  She was as warm and friendly as always, but distracted, as we exchanged proverbial greetings.  When the niceties were done, I heard her voice change and become quite serious as she said, “Meliss, I wanted to talk to you because I’ve been diagnosed with…  pancreatic cancer.”

The words hit me like a ton of bricks. Time stopped.  I could not speak for what seemed like ages. I just sat there, staring at the phone in shock and in absolute, total disbelief of what I had just heard.

My brain raced as I thought things like:  Wait!!!  You don’t smoke or drink. You didn’t do drugs or have a risky lifestyle. You’re younger than me!  No, wait… you’re a Mom and my friend and a Christian!  How could this possibly be?

She broke the silence by saying, “I know that’s what your brother had, so I wanted to talk to you about what’s it’s “really” going to be like.”

How do you even begin to explain to a good friend; a woman you’ve known and loved for 13 years,  what (you believe) it’s going to be like living with (and most likely dying with) pancreatic cancer?

Charlie had died 3 years before and walking on that path with him nearly pushed me over the edge. She knew all of this.  She and I had sat in the lunch room or during our Saturday Morning  breakfasts and talked about all of it.  She had listened to my stories and watched as I flew back and forth from Ft Lauderdale to Boston tying to help him and manage his treatments.  She had seen first hand, the toll it took on me and had heard all the horrible stories about how “it” was ravaging his body.  She also knew that he had lasted only 9 months.

How could I possibly sweeten this bitter pill?

I have no idea what I actually said to her during that conversation. If I know me, I would have been honest with her, but probably added sprinkles of optimism, like; “Maybe they caught it early!”  “Maybe you’ll be eligible for the Whipple surgery! ”

I saw her only several times in the past few years, but we exchanged emails, phone calls,  Skyped occasionally and kept up with each other on Facebook.

In all this time since her diagnosis, I never once heard her ask “Why me?”  There was never an utterance of anything close to what I would call a complaint.  She openly accepted that this was her fate and she was going to live her life on her terms and to fullest for however long she had left.  …and by God she did.

She was always well informed and realistic about her prospects, but exuded a faith and hope that left even me believing that if anyone could beat this, it would be her!

And you know what, she did!  She beat all the odds.  She made the Medical Journals. She kept Oncologists around the country, scratching their heads!

She had a full and beautiful life for a lot longer than anyone ever expected.  And in the time she had she touched the lives and hearts of so many people. She was a beacon of light and hope and she generously passed that onto others who were struggling with the same disease.  She was authentic and brave, loving and strong.

She was truly one of a kind and I miss her.

Thank you for being such a good friend to me and for showing me what grace, hope and faith looks like.