It’s been 7.59451 months since I experienced the godawful  headache and fatigue.  It was another 11 days before I would surrender to the pain and go to the GP;  she in turn would send me to A&E, that same day.  After 8 hours in A&E, I would be sent home; told I had migraine.  After another 7 days, I’d be back at the GP and sent (for the second time) to A&E. It is now I’d be told I had “… Giant Cell Arteritis, also known as GCA.”

I remember the first thought that went through my head, it was… “What the fuck is GCA?”

A lot has happened since then.

First, there was a ridiculous amount of time wasted, with me lying on the couch, staring at the walls and feeling sorry for myself.  I was so paralysed with exhaustion and fatigue, it is absolutely unimaginable, unless you’ve experienced it yourself.  To this day I don’t know if I’ve exaggerated how insanely tired and “out of it” I was, or if it was really was as bad as I remember it.  In any case, I was sure I was going to die and I prepared myself accordingly;  sleep, make amends, sleep, make more amends…

It was shortly after this (since I didn’t die!) that I discovered fragments of me, to whom, I had never been introduced.  I was formally given introduction to, “She-Who-Shant-Be-Named,” over a short and very frenetic period of time.  She is a daunting creature, who apparently had lived in the bowels of my mind for the entire 63 years of my life; but was only coaxed into revealing herself, when I began ingesting 60-80 mg of prednisolone daily!   She came “head on,” like a fright train, outta nowhere!   She scared the  shit out me…  because…  well because, she was me!!!!  …but yet, she wasn’t.  It was/is very confusing! 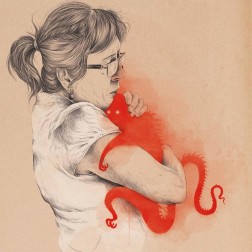 She was more brash than me (if you can imagine that!), louder and much more annoying than I ever could be!  She darted around the house and my mind, at the speed of light.  She woke me up at 2:00 am, and would not let me rest until sometimes 5 or 6!   She pissed me off that’s for sure…  annoyed me, taunted me, and laughed in my face!

Ohhhhh, but how she inspired me!  She opened my mind to thoughts and dreams I had never dared to entertain! She gave me permission and empowered me to rant and rave and curse the “Power’s That Be,” openly, honestly, and without regret or apology.

We had/have a love hate relationship, she and I; and although I know she’s still within me, I don’t get to hang with her quite as often as I used to.  Instead of me becoming more wild, free and unbridled; I have unwittingly caused her to become more restrained and well behaved.  How very sad, huh?

“She-Who-Shant-Be-Named,”  convinced me to enter an Art Competition; helping me 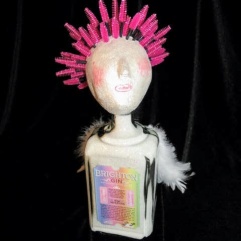 create an ethereal sculpture made using a Brighton Gin Bottle!  The head was formed of papier-mache, she is painted a translucent pearl, has beautiful white wings and her hair (similar to mine) is fashioned out of bright pink disposable mascara brush tops!  Her name is “Divine Gintervention,” and she’s beautiful!  She didn’t win anything, but she gave them a run for their money…  or at least I like to think she did.  She sat proudly amongst the fine, formal, artesian works of art… and she held her own!  She now sits in a prominent spot, in the flat, where I pass by her everyday!

Writing this “Blog,” became something that I was compelled to do (again by “She-Who-Shant-Be-Named,”)  shortly after my GCA/PMR diagnoses.  It became a bit of an obsession, really.   Words would just pop up on the screen and I had no idea where they had come from!  I’d sit down with the intention to write about one thing; and the next thing I knew the subject had changed and I was off on a tangent writing about something totally different!  My writing seemed to be entertaining people and making them smile, which was reward enough for me!  I loved writing and people seemed to enjoy reading…  a win/win as they say in the business.  (Not sure what business exactly, but I’ve heard it said!)

Ahhhhh, and then there’s the Prednisolone!  The Devil’s Tic Tacs, as they are known!  I went from 40 mg to 60 mg within two days of being diagnosed.  And then (after seeing the Rheumy) I began an aggressive “taper down” plan.  (Ooooo just those words, “taper down,” they give me the heebie jeebies!)  All went well from 60 mg down to 45 mg, but then ALL HELL BROKE LOOSE!  And again, I thought I would die! 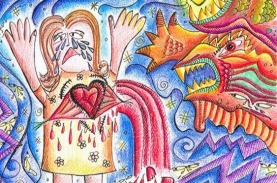 I (somehow) got through Christmas and the New Year, although I don’t remember much of it at all, i.e. shopping, opening gifts, seeing people, decorating a tree.  Hmmmm? Did we even have a tree????

I do know that it wasn’t until sometime in January/February that I realised (really truly realised) that I was ill.  This was not a cold or some weird virus.  “This” was not going away anytime soon.  This (whatever this was!) was going to kick my ass and irreparably change my life, forever.

Coming to grips with the fact that you’re “seriously ill,” is difficult at best.  The first thing you realise is that you have “no control.”   That is a hard pill to swallow.  There’s nothing you can do, nobody you can call, no “Complaints Department” to write to.  You simply  have to accept you have NO CONTROL over your current situation.

Next, you come to understand (and believe me, this is a very bad day!) that your very “existence,” has been changed.  Your life is no longer what it was.

You can no longer keep up.  You find yourself on the peripheral.  You’re confused and you feel lost.  People (you love) are out of reach.  You want to communicate, but your mind is like a giant marshmallow!  They look at you, like you’re crazy… and you wonder if you are!  You’re so tired, that you can’t comprehend what’s happening around you.  It’s surreal and disheartening. 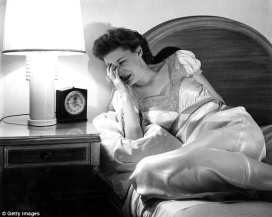 There then comes a point in time, when you start to differentiate (just ever so slightly!) illness symptoms, from Pred side effects, from Pred withdrawal symptoms.  There are only subtle differences, and it’s almost impossible to identify one from the other, but they all are real and equally as nasty.  It doesn’t really matter because you feel like shit, regardless of the cause.

As the weeks/months pass you unknowingly experience what feels similar to (if not exactly the same as) Elisabeth Kübler-Ross,’ “5 Stages of Grief & Loss.

Those stages are defined as: denial, isolation, anger, bargaining, depression, and acceptance.  And they all (except for “acceptance,” I guess…  I don’t really know about acceptance, I havent gotten there yet!) SUCK!

You bargain with “God,” if you believe in one and you maybe even try to make a deal or two with the devil, on those really bad days.  You promise to be better and do things differently, if you can just have your old fucking life back.  You’ll eat better, stop drinking, get more exercise, get your stress levels in check, etc, etc, etc,  It’s all to no avail.

Minutes fade into hours, hours into days, days into weeks and weeks in to 7.59451 months. And here you are.  You’re still fighting; even though you vowed to give up this losing battle long ago.  You carry on, wearily.

You look back and (although you don’t remember a lot of it!) you know it was HELL.

You know it should have broken you and you’re surprised it hasn’t. 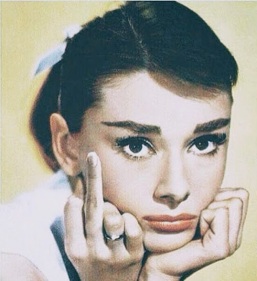 You didn’t think you had what it would take…  but you did.

Because you’re stronger than you realise…   and so am I! 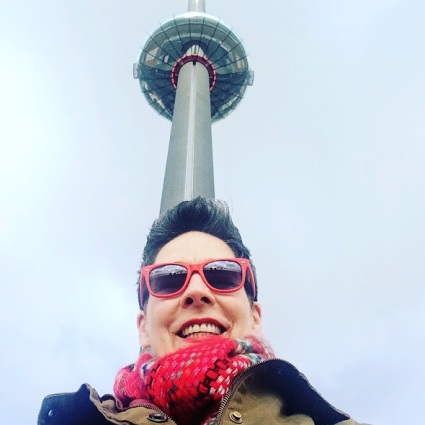