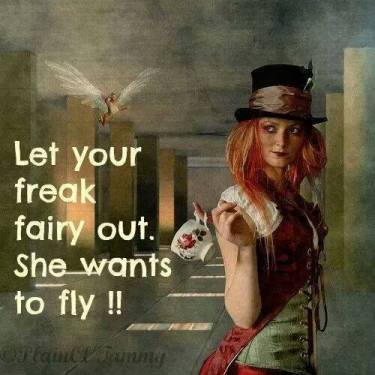 Recently a “newbie,” on the HealthUnlocked forum, posted her appreciation for some help and advice she had received from expert members of the forum.  In her note of thanks, she added, “…I don’t feel so much of a freak anymore.”

My initial thought was, “Hmmm? How odd.”

You see I’ve spent much of my adult life longing to be a “freak.”  Fighting to be different.  Doing everything in my power to distinguish and differentiate myself from the masses.  I like standing out from the crowd.  Being the “odd man out.”

However… It wasn’t always like this.  When I was a kid, I would have killed to “fit in.”

In the 8th Grade, when I was 12-13, (Oh God, what a horrible time that was!)  I was unusually tall, “big-boned,” and a wicked “Tom Boy.”  I stuck out like a sore thumb.  I had the beginning’s of acne, my “boobs,” were growing I had just gotten my period, which I was sure the whole freakin world was aware of!

And what a miserable fucking existence it was.

My secret wish was to just disappear.  I used to wish that the sidewalk would open up  and just swallow me whole, as I walked to school each day.  I imagined local paper, The Worcester Telegram & Gazette, would run a headline that would say; “Freakishly Tall Bell Hill Girl Disappears Without a Trace.”

In those days, I spent a lot of time in the very top branches, of the “apple tree,” which was in a wooded area, near our house.  I’d climb the tree and sit up there for hours, looking out over the city.  I’d lose myself in the view…  you could see all the way to the Worcester Airport, which was at least a thousand miles away!  And from up there, everything seemed better.  Slower. Quieter. Easier.

There were no big brothers torturing me. No kids making fun of me. My Mom wasn’t constantly reminding me to “act like a lady.”  (What does that even mean?) There was nobody looking at my boobs or my feet!  (More on that later!)

I grew up with two older brothers who I idolised!  Along with my being “Daddy’s Little Girl,” my brothers were my “role models” and I adored them.  I played Cowboys & Indians (sorry I know that is no longer socially acceptable, but Cowboys and Native Americans just doesn’t sound right!). I played with plastic Army men (there were no plastic Army women) and Charlie and I frequently wielded machine guns (also not socially acceptable!) and played “Gangsters,”  as he was a big Eliot Ness and “Untouchables” fan.

For many years it was me and my brothers; and as far as I knew, we were the same.  Imagine my surprise when I started growing boobs and got my period.  I won’t even mention the trauma I experienced when I came to realise (…and I have no idea how that actually came about!) they had “penises'” and I obviously did not!!!!

Seriously, could life get any worse?

Shoes, right…  I remember going to buy school shoes with my Mom; she asked if I could try on a particular pair of shoes in a Size 10 (UK 8).  As the Salesperson (a 30-40 year old man) walked into the back room, he mumbled,  “I might as well just bring out the box.”   Well, my Mom heard him and went ballistic!  Not only did we not try on the shoes he brought out, we left the store in a huff and I don’t ever remember ever going back into that store again!  I was proud of my Mom, but boy did that experience leave a scar…   that’s probably the reason I tried desperately to squeeze my feet into shoes that were too small for me, for many years to come.

So “When did things change?”  I hear you say.  Well, once my “boobs” were well established and could no longer be concealed, and my brothers (who were now in their mid teens were treating me like a leper, I had no choice but to be the female/girl/woman I was meant to be.

As I started High School, it became painfully obvious that I didn’t fit in with any of the  firmly, established cliques.  I wasn’t an academic or a jock.  I was way to tall to be a Cheer Leader and had no artistic ability… and I was (I thought) way too cool to be a “nerd.”

So, I created my own persona; I became this weird, tall, loner chic, who at 14 volunteered afterschool in Communist Bookstore, marched in anti-war rallies, smoked pot, worked with a local Black Panther’s group to set up a Breakfast Program and hung out with 18, 19, 20-year-old “Hippies.”  (WAIT? What’s that noise?  Oh that’s just my Mom rolling over in her grave!)

Becoming a freak became (sometimes consciously, sometimes unconsciously) my main goal in life…   much to the dismay of my parents (and my brothers!) “Who is this freak?” I could hear them thinking.

How I lived though my teenage years is a huge mystery! I took every risk and chance I could take.  I tried everything at least once and somehow lived to talk about it.  All I know is that I must have had one helluva “Guardian Angel” and how I never got caught, is an unanswered question!

Why?  I don’t know exactly…  Maybe because I could never really fit in anywhere, so I felt the only way I could survive (and not be swallowed up by the sidewalk) was to purposefully, swing the pendulum as far in the opposite direction as I could.

Ahhhhh, crap…  I may have lost my point, but I think it’s that being different is a GOOD THING!  Not being like everyone else is “okay!”  Standing above fray empowers you.

Having a weird, unheard of illness (or two) like PMR and/or GCA is totally cool and quirky!   I mean, seriously, if you’ve got to be sick, you might as well have something that no one has ever heard of right?  Why be like everybody else?  Be different!

Think about it… your body is so amazing and fine tuned; so hypersensitive and “on guard,” that it (unfortunately) attacks healthy cells in your body (by mistake) trying to protect YOU!

How freaky is that?

And all the medical geniuses in the world haven’t been able to explain what causes this!

We are a freak of nature!  We are the anomaly!

I want to tell the “Newbie,” to embrace her freakishness.  Own it.  Flaunt it.  Don’t shy away from it.  You are a freak and you’re fabulous because of it, not in spite of it!

Be vocal and tell the world you have this weird, unpredictable, hellish, unheard of illness!  Educate them.  Make them understand.  Let them know we’re out here and “we’re mad as hell.”  Let them know we will not sit quietly in the corner waiting for the scientists, researchers and big pharma to catch up…

We are FREAKS and we will be heard NOW!

Well,  …just as soon as this tiredness and fatigue settles down a bit.

Oh, and my tapering schedule isn’t kicking my ass, and I can get my family and friends to listen to me for more than 2 minutes without their eyes glazing over and oozing boredom.