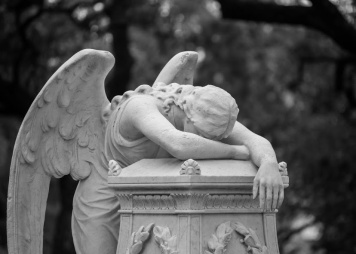 I’ve endured my share of loss; that’s not unusual, since I’ve been on this earth for 63 years. I have lost grandparents, parents, aunts, uncles, cousins, good friends, ex-lovers, and perhaps the most painful of all, both of my siblings.

I’ve always allowed myself, no, forced myself to be in touch with my emotions and to feel these losses deeply and genuinely.  I’m not embarrassed by raw, gut wrenching emotion, never have been.

So… I assumed from a young age, that I had this “grieving” thing under control.

Beginning with the loss of my grandparents, I allowed myself to publicly cry, feel the loss fully, openly express my outrage with God and then went about the business of moving through the stages of grief and loss, as well as a 12-13 year old can.

Some losses I accepted more easily than others.

The loss of my Mom for instance; I readily accepted and was grateful when the end finally came.  Lung cancer that metastasises to the brain, three times… is not nice. I was okay with her moving on.  I had grieved the loss of her, months before it actually happened and other than the normal feelings of loss and separation, any young woman would feel when she losses her Mother, I came out of that experience surprisingly unscathed.  The most prominent, lingering feeling was (and to this day is ) a never-ending loneliness.

When Dad died, that hit me a lot harder.  Unlike Mom’s death, I had no time to prepare.  I got a call and he was gone.  There were no last words, no goodbyes, no time to show or say how much I really loved him.

He just no longer existed.

That loss hung on for a while… it took its toll on me and impacted me on a deep emotional level.  I had regrets and things I had always thought I would be able to make right.

They say time heals all and in time I accepted the fact that Dad died the way he wanted; quickly, hopefully painlessly, by himself under a beautiful blue sky, with the sun shining down on him, while he pottered around the  garden.

I concluded that people died and I was just one of the lucky ones who was able to cope with that harsh reality.

Then, there was my brother Charlie.  He turned yellow and was dead 9 months later.  “Pancreatic cancer,”  enough said.

I took care of him, spoke to the specialists on his behalf, acted as his primary medical advocate and proxy, stayed with him when he was in the hospital, talked to him about what he wanted “when” the time came…  I did what all good Project Managers do, I managed his terminal illness.  I was with him when he died, helped make the funeral arrangements and thought I was “dealing” with his death pretty damn well.

Imagine my confusion, when months had passed and I couldn’t seem to shake the feelings of depression, anger and resentment.

I was experiencing weekly panic/anxiety attacks, people at work were complaining I was aggressive and belligerent, I was smoking cigarettes, drinking a helluva lot of wine and I didn’t give a damn what anybody said or thought about my behaviour.

When my husband voiced his opinion I jumped down his throat, lit a cigarette, poured a huge glass of wine and effectively tuned him out.

I experienced regular headaches, frequent mystery viruses, aches and pains, used a lot of sick time, and spent many days just lying on the couch feeling like shit.

This went on for well over a year!

I finally got help, but it took years to get through to the other side.  I was told I was suffering from “complicated (or complex) grief.”

I had become “sick” because I had not dealt with my grief.  I had successfully managed Charlie’s illness and subsequent death, but never dealt with my own feeling of loss, grief and abandonment.

When I left for Boston, at the end of February 2017, I never thought that trip would end with me standing in front of an urn that held my brother Tommy’s ashes.

Originally, I feared he might be suffering from alcohol induced dementia.  Or lung cancer that had finally metastasised to his brain.  Maybe it was CTE, from all those blows to the head…  but I had never, ever considered he would DIE!

The planned, two-week trip, lasted  9 weeks!  What began as my best effort to “manage” and help “sort out” his health issues, ended with me having to make incredibly difficult end of life decisions, on his behalf;  “No, do not admit him to ICU.”  “No, do not put him on ventilator.”  “No, do not administer antibiotics.”  “Please just give him oxygen and morphine and keep him comfortable.”

My brother had decided it was time to die and like it or not, I had to respect that decision.

Again… I believed, under the impossible circumstances I had been given, I had stepped up and effectively handled a totally impossible, inconceivable situation

Back in the UK by early April,  spring and summer found me consumed with wedding preparations.  My youngest daughter’s wedding, in early August, still had a ton of unmanaged tasks.  I threw myself into that like “tie-dye on a hippie!”  I allowed myself to be fully and wholly consumed with the undone tasks and endless minutiae.

The wedding came and went… I remember it as the perfect day, but I’m not sure if what I remember are actual memories or the mental images of what I had so meticulously planned and masterminded for all those months.  It’s all a bit of a blur, if I’m truthful.

August, September and October saw me thankfully back at work at the hospital and at the hospice helping terminally ill people cross over.  I had also joined the Chaplaincy Team and spent many hours visiting and talking with some phenomenal people, who “yes,” just happened to be dying. .

Then… out of nowhere, Monday, November 13th, found me on my knees.  A blinding headache, that had been in the background for 19 days, was officially diagnosed as not one, but two debilitating autoimmune diseases.

“History repeats itself because no one was listening the first time.” ~ Anonymous

Have I really gone and done it again?   Have I allowed history to repeat itself, because I wasn’t listening the first time!!!  WTF?

With a lot of time to sit around contemplating my wellbeing (or should I say my “lack” of well-being) I have had this epiphany!

“I manage “grief/loss” situations flawlessly, but I forget to internalise and subsequently deal with the emotional by-products.”

I apparently (and subconsciously)  allow them to fester and froth inside me like the noxious liquid, in a witches cauldron; and then… at the perfect, most inconvenient moment, it all bubbles over, drowning me in a strange and mysterious illness!

It is my own unresolved grief making me sick!

It’s not God’s will.

It’s not the environment.

It’s not my lack of exercise or poor eating habits.

It’s my own physical body, screaming at me… trying to draw my attention to the emotional and mental pollutants being created and then deposited throughout my entire body by my very own GRIEF!

Talk about the perfect explanation of an autoimmune disease!

Okay… Okay…  I think I get this time! I think I understand.

I submit. I surrender. I give up.

I promise I’ve learned the lesson.

Grief just smiles and walks away…  I hear him whisper to himself, in the distance,