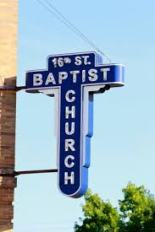 On September 15th, 1963 four members of the Ku Klux Klan bombed the 16th Street Church, in Birmingham Alabama. The explosion killed four young girls and injured 22 others. It also shook our nation to the core. Dr. Martin Luther King, Jr. described that act as “..one of the most vicious and tragic crimes ever perpetrated against humanity,” and I guess, for it’s time, it probably was.

I’d like to say that we, as a species, have come a long way, from those dark days of hatred and ignorance, but after recent events, I’m afraid we haven’t even moved the needle.

There’s nothing I can say here that hasn’t already been said, by many people who are a whole lot smarter, more educated and well respected than me… but I can not just sit back and let this event pass without having a “rant.” The problem is, I’m just too damned sick to my stomach and disgusted with humanity, to even “rant.”

I am in disbelief as to how things could not have changed at all in 52 years? How can murdering innocent people, in their house of worship, for no other reason than the color of their skin, be a thing?

I’m sick to death with the lack of gun control in the US; I’m tired of there not being adequate social services to identify problems in people like Dylan Roof; I’m more than angry that an NRA Board Member dared blame the Pastor of the Emanuel African Methodist Episcopal Church for the deaths, because (as a Senator) he had voted against gun owners to be able to carry concealed weapons without permits. He went further to imply that if some of the people in the church had been allowed to have concealed weapons, maybe they wouldn’t be dead. *I’m sorry, what what the fuck are you talking about?*

I’m basically a positive person… I try to be upbeat and optimistic about life. Even when I’m not succeeding at that, I just “fake it, till I make it.” … but I feel the world is just becoming more and more absurd every day.

Up is down and right is wrong.

People are {still} judged by the color of their skin; how much money they have; their political and religious beliefs; who they sleep with, along with a myriad of other, totally random, ambiguous and illogical criteria! Young, disturbed white men, still blame black people for the woes of their nation, instead of corporate conglomerate who own and run the country!

I was born in an era when we truly believed anything was possible! We {Hippies} believed in love, peace and happiness and thought we could change the world by exhibiting and believing in those principles.

Now a days… I struggle to believe that we won’t all just slowly kill each other off and leave the whole, polluted, desolate world to itself.

Hey!!!! Cool! I guess I was capable of a good rant after all. There is hope in the world.